If you walk in the Lawrence Public Library between now and the end of April, you’ll find two interesting installments in our front lobby! Our programming librarian tracked down and set up a 70’s style typewriter and a mailbox for patrons to type out a quick poem and send out into the world. These poems will show up in random locations around town–in a bathroom stall at bar, in a restaurant menu, in a library book–and who knows where else! Also in the lobby is a “poetree”–thought up by one of the children’s librarians. Bare branches provided by Kansas Tree Care will “grow” poetry leaves throughout April made by kids who attend poetry related story times.

The Poetry Off the Page series of events got of to a great start with last night’s performance by local poet, Mark Hennessy. Before launching into his performance, he expressed his gratitude for inviting him to the library and said that if he managed to sell any of his poetry books that he brought along, he would first pay off his library fines. What I initially imagined to be a simple reading turned out to be an engaging audiovisual performance including slam poetry accompanied by a bass, girls hula hooping, video projection and a full band performance. In between recitations, Mark, bringing the symbolism of one of his poems to the audience, even passed out apples to people in the crowd. He concluded the 40 minute set list by inviting two guitarists and a couple of percussionists up to the stage for two folksy songs, led by his vocals. Altogether, it was a fun performance and I’m glad we invited him to kick off our National Poetry Month celebrations at the library. 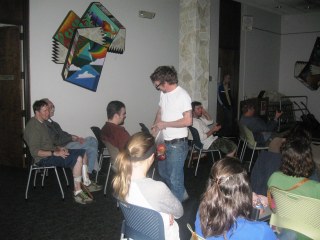 I’m really looking forward to next week’s Poetry Slam, especially since I talked to Mark and he has agreed to sit in as a guest judge! What’s even more exciting is our grand prize–the programming librarian said we have enough funds for us to give away an iPad 2 to the best slammer! The first ten poets to sign up next Wednesday will compete in three rounds–five will make it to the second, and the top three will slam for the iPad. We’ll also be giving gift certificates to local businesses to the first and second runners up, as well as a bag of frozen burritos to the audience’s favorite poet not included in the top three. When planning the slam, I was initially concerned that there may not be much interest, but I’m thinking now that an iPad is up for grabs, we’ll get a good response!