Last year I had so much fun with Teen Tech Week, I couldn’t wait to start planning this year’s events at the Oskaloosa Public Library. We’re still about a month out, but I’ve gotten everything finalized and the promo posters are off to the printer! Not wanting to do the exact same thing as last year, my youth librarian and I worked with our Teen Advisory Board to see which programs were worth repeating and what ideas they could come up with. I like to go all out, so we’ve got something planned for every day of the week: 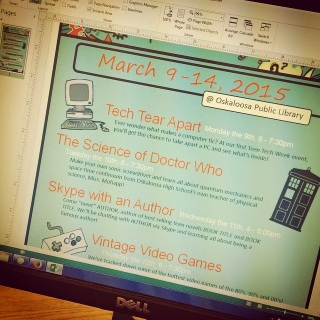 Tech Tear Apart
This program was so popular last year, we had to do it again. Over the summer, we had to switch out our entire lab of computers which were running on the now outdated Windows XP. I saved a few, so we have plenty of PC’s for teens to tear into. We’ll pretty much give them the tools, let them tear them apart, and then have a discussion about what each of the parts do. It’s a great opportunity for those who may not have a spare computer lying around to see what makes them tic.

The Science of Doctor Who
We have a core group of teens who are big fans of Doctor Who. It was our original intention to have a professor of physics come in an speak to teens about space time continuum and quantum mechanics, but I could never get a response from anyone at the local college. Instead, we’ll be watching the documentary What the Bleep Do We Know? and making sonic screwdrivers and TARDIS.

YouTube Request Hour
Sort of a last minute, easy program, we’re planning to hook up YouTube to one of our big screens and let the teens request their favorite videos. Music, parodies, silly cat videos – anything PG thirteen. I was hoping to do another Skype chat with an author, but again, no responses to my emails and I was getting pretty close to crunch time.

Classic Video Game Day
Between my youth librarian and myself, we’ve got a good collection of vintage video game consoles. Another simple program, we’ll hook the systems up to a few old tube TV’s and let the teens play video games from the 80’s, 90’s and 00’s. And what’s a video game day without snacks?!

Robotics Demonstration
Our local high school sponsors a pretty successful robotics team, The Sock Monkeys. I’ve invited them in to give a presentation on what they do and to give a demonstration of their robot. Many of the teens who come to our programs are already involved, but it also gives The Sock Monkeys some needed volunteer time.

I have to give a big shout out and thank you to YALSA from whom I borrowed some graphics and a few ideas. To see some of their ideas visit their site at http://teentechweek.ning.com/. Teen Tech Week is a great way to promote the library’s technology resources and get teens excited about using the library. The teens who participated at the Oskaloosa library last year really enjoyed the programs we offered and are looking forward to this year’s.

Hi! I'm William, a librarian from Lawrence, Kansas. I blog about collection development, social media for libraries and librarians, displays, programming and more. View All Posts