Yesterday, my staff and I completed a major re-cataloging, labeling and shifting project. A long time ago, the library had a separate biography section, and at some point, one of the directors decided to interfile them into the nonfiction. We’ve had a number of patrons recently request, though, that we have a separate section again. We certainly don’t have a huge nonfiction collection, but this was one of the biggest projects I’ve done since I started as director.

I began by going through the collection pulling the biographies. One of the previous directors had the cataloging staff start putting biography stickers on new titles, but they didn’t go through the collection and put stickers on anything already on the shelf. This made the process a little more complicated than it could have been, because I had to go through each volume on the shelf, especially in the 900’s, 800’s and 700’s.
What also complicated it was staff was directed to put biography labels on anything that had subject headings of biography or memoir. To me, there’s a definite difference between the two, and I only wanted biographies in my new section. Many of the titles that I considered memoirs were by obscure or not well known writers that I didn’t think people looking for biographies would be interested in. For example, The Boy Who Came Back from Heaven had a biography label on it. 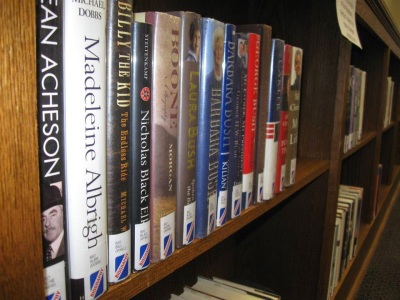 The next step was re-cataloging and labeling (or un-labeling) the volumes. We decided to organize the titles by the last name of who the biography is about, and if there were multiple biographies on one individual, they would be organized by the last name of the author. (I borrowed this idea from the Lawrence Public Library, who completed a similar project before I left. I also went with the same labels!)
My cataloger made quick work of changing the classifications in the system, and a library assistant made sure each new label looked nice and neat. We then started placing the biographies in their temporary location – empty wooden shelves along the wall at the end of the stacks. This would have been a nice way to use these shelves, but they’re kind of hidden and are too low.
The permanent home for the biographies is between the large print and nonfiction stacks. This meant that we had to shift the entire nonfiction collection back to accommodate them. With the help of my staff and the local high school robotics team who volunteered their time, though, we accomplished this within three days. We now have a biography section!